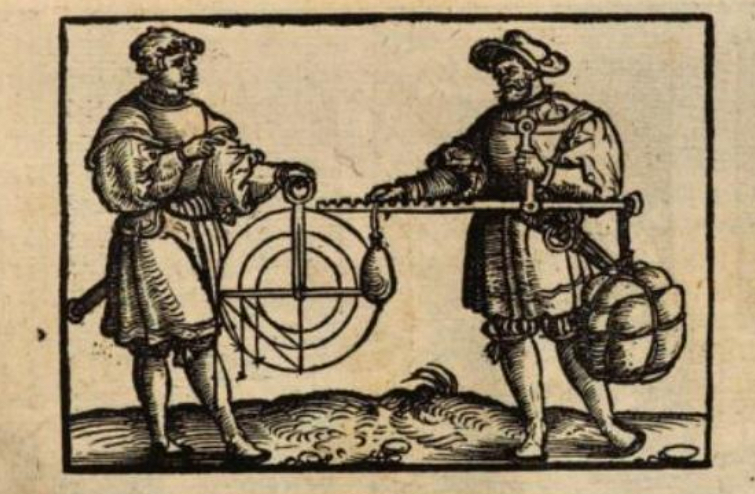 Weighing was a ubiquitous activity of pre- and early modern societies. The earliest and most common form of material testing, it had a crucial role in commerce and technical, artisanal, and pre-industrial contexts. Notions of weight and weighing practices were essential to learned disciplines like medicine, pharmacy, and natural philosophy. Recent scholarship in art history has also identified weight as a relevant category for the production and reception of early modern art objects.

This workshop wants to bring together historians from different backgrounds to study the spectrum of connotations –both epistemic and cultural– that weight and weighing practices assumed in the early modern period. What were the roles, functions and features of weighing in different fields? How did notions of weight and weighing change, overlap or transfer across domains and/or geographical regions? What was the interaction and influence between learned and practical uses of weighing?

Areas of interest are for example commerce and trade, assaying, alchemy and chemistry, medicine, pharmacy, art, natural philosophy. Contributions can for instance consider: analyses of weighing as an epistemic practice in a field or across fields; the cultural use of weighing and ‘balance’ metaphors; studies of weight in artisanal/art contexts and in recipes; conceptions of weight, matter, rarity and density in natural philosophy; the role of weight and weighing in technical and industrial settings; uses of the notion of weight in mathematical instruments and practical mathematics; weight and the history of mechanics; weight and early modern systems of units.

The workshop will be held online during the last week of February 2021 (February 22nd-26th). Please send an abstract of max. 300 words to cesare.pastorino@gmail.com by November 15th, including your contact information and area of specialization.

(*) “The Weight of Things: Quantification of Matter and the Exchange of Technical and Learned Knowledge in Early Modern Europe,” is a research project funded by the German Research Foundation (DFG) and hosted at Technische Universität Berlin. Its goal is to study the early modern investigation on the weight of substances from a multidisciplinary perspective.